Why Are There Accounting Rules?

Why Are There Accounting Rules?

The accounting rules for public pension systems are established by the Governmental Accounting Standards Board (GASB). This is the private body of accountants that defines the Generally Accepted Accounting Principles (GAAP) in use by local and state governments in the United States.14 (See figure on page 8.)

Old-age pensions were among the reforms advocated by the socialists, communists, and the Progressive movement in the United States during the 19th century. In the latter years of the century, private employers around the country adopted the idea, some prompted by labor unrest, others prompted by the desire to avoid it.

Government pensions have a longer history. Pensions for disabled and retired military personnel were common decades earlier. George Washington prevented a mutiny in the Continental Army by intervening personally in a dispute over pensions during the Revolution. The granting of pensions to civilian government employees, however, marched in step with similar advances among private industry, starting with New York City’s establishment of a disability pension system for its police in 1857 and advancing through several of the nation’s large cities. By 1917, 85 percent of the nation’s cities with populations over 400,000 had some form of police pension.15

The states were a bit slower than the big cities. Massachusetts was the first state to establish a pension system, in 1911, and by 1929, there were only 1,003 retired individuals receiving pension benefits from only five states. The pace quickened substantially with the onset of the Great Depression, and plans were established quickly enough that by 1935, when Social Security was introduced, there were over 400,000 pensioners across the country receiving benefits in 32 states.16

By the end of the 1930s, many government employers across the country were offering pensions to their employees. Many offered them on a pay-as-you-go basis, with payments drawn from tax revenue, without an associated pension fund, or with a relatively small fund whose purpose was only to manage cash flow. Some of these were funded by special dedications of tax revenue, such as fines, permit fees, or, in at least one city, dancing school licenses.17 Over time, out of fear that these pension commitments would balloon in decades to come, many plans moved to an actuarial system of funding pensions, with a pension fund whose income would pay much of the pensions, and by the 1980s, this transition had been made for most plans.18

Because of the widely varying nature of the accounting systems used, it is difficult to make blanket statements about the state of pension funds at the time. Some consistent data is available from the Census Bureau, which began a survey of state and local government employee retirement systems in the 1940s. Early data from that survey show that investment earnings were substantially overshadowed by plan contributions from employers and employees until the 1980s, implying that most plans were not funded on an actuarial basis until then.

In the new era, a wide variety of accounting standards were used to assess the health of these pension funds. There were different ways to estimate the long-term liabilities, the marginal cost of a new employee, the value of the assets, and even the lifespan of the employees. Comparing one fund to another was challenging where it was possible at all. In 1994, GASB sought to address this problem with their Statements 25 and 27. These established, for pension plans and their sponsoring governments respectively, that actuarial data be included in fund annual statements, and strongly discouraged managing plans on a pay-as-you-go basis. They dictated that a plan calculate an “Actuarially Required Contribution” (ARC) according to their formula, and specified how a government should report whether or not it had contributed that amount to the plan fund. 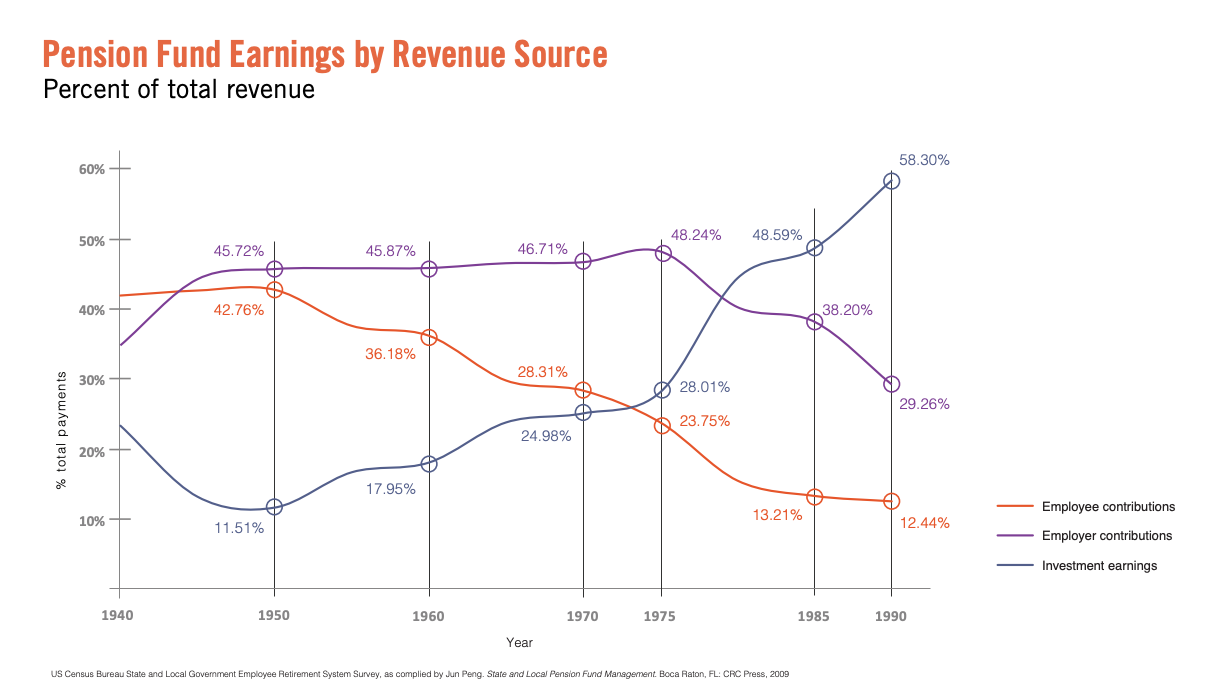 Earnings from state and local pension funds. (Dollar values in millions.) Until the 1980s, investment earnings from pension funds did not play the largest role in funding pensions, many of which were pay-as-you-go systems with small funds used for managing cash flow rather than for generating investment income.19 You can see the importance of investment income growing substantially over time, but really picking up momentum in the late 1970s.

The effect of GASB 25 and 27 suggested that the nation was undergoing a slow-boiling pension funding crisis. Many governments were not making the ARC demanded by their pension fund actuaries, and future liabilities seemed colossal.20 Debates raged, and continue to rage, about the proper discount rate to use to calculate future liabilities of systems, and whether pensions were viable at all. Some plans were closed, others scrapped in favor of simple savings plans now called “defined contribution” (DC) plans,21while others were funded with bonded debt.22

After these reforms, despite the changes in incentives and standards, the unfunded liabilities continued to mount. Faced with what seemed to be a rising tide of red ink, GASB acted again in 2012, with Statements 67 and 68, again separated to apply to the fund and their sponsoring government, respectively. By adding specificity to the rules, these statements created a greater degree of uniformity across pension plans. However, they also create a much more demanding set of rules for predicting future liabilities. For example, GASB 68 removed a government’s discretion to choose among the methods used by actuaries to allocate the marginal cost to the fund of an employee’s time on the job and put strict controls on the discount rate that a pension system must use to estimate its long term liabilities.

GASB 67 also codifies what was more or less standard practice for actuarial accounting, completely excluding from consideration future contributions to the system from future employees or future employers. In essence, an unfunded liability calculated under these conditions, asks how much the sponsoring government will owe if the system is closed tomorrow and all current pension debts paid off over the ensuing decades. However, most systems will not be closed tomorrow and will continue to receive contributions from both the employees and employers for decades to come. This makes an unfunded liability potentially useful as a planning value, but not a good prediction of actual payments to be made, as we will see.

It is important to recognize the source of the pension funding crisis. Obviously, our nation—like all the others since the beginning of time—suffers from improvident politicians. There have been many skipped or shorted payments into the nation’s public pension systems. Financial market crises have also done important work to increase the pressure on pension funds. The financial market turmoil of 2000–2001 was especially severe, and the losses of 2007–2008 have not been won back by many funds. For example, CalSTRS, the fund for California teachers, was fully funded as recently as 1998, before the popping of the tech bubble in 2000–2001.23

Skipped payments and disappointing investment returns are only part of the story. For many funds, these only exacerbated an original funding shortfall due to the transition between the pay-as-you-go model and the actuarial model. For governments making that transition, pension commitments already existed from the pay-as-you-go period. These commitments were made to employees who had not made contributions to the pension fund, not through any fault of their own, but because that was not how the system worked during their careers. Thus, many funds were established with a significant unfunded liability at the outset. In an accounting sense, this might be considered the original sin.24

But what is the source of the feeling of crisis that so dominates the discussion of pensions today? As with Detroit, debt due in the distant future is not a crisis today, even if it is a cause for concern. To a large extent, the source of the crisis is the accounting rules themselves and their misapplication by policy makers and ratings agencies. The GASB statements themselves are bland and even seem thoughtful, but the uses to which they have been put somewhat less so.25