Richmond’s low-income communities and communities of color face health challenges that mirror many of the structural challenges facing similar communities in the US. For example, more than 50 percent of Richmond’s youth are overweight or obese, and approximately 58 percent of Richmond adults are considered overweight or obese.12 There are higher rates of obesity among youth of color in Richmond, with obesity at 34 percent among African American youth, 33 percent among Latino youth, 25 percent among Asian youth, and 13 percent among white youth.13 Such high rates of obesity have been linked to chronic diseases including diabetes, hypertension, cardiovascular disease, cancer, and stroke.14 The prevalence and targeted marketing of processed, high-fat, and high-sugar foods and drinks to youth from marginalized communities has only exacerbated these health issues.15 While food and nutrition play an important role in health, other environmental and social stresses cannot be ignored as they also factor into individual and collective well-being.

Part of the problem with the current food system is that it simply does not serve much of the Richmond community. Many parts of Richmond are considered food deserts. According to the United States Department of Agriculture, food deserts are:

. . . urban neighborhoods and rural towns without ready access to fresh, healthy, and affordable food. Instead of supermarkets and grocery stores, these communities may have no food access or are served only by fast food restaurants and convenience stores that offer few healthy, affordable food options. The lack of access contributes to a poor diet and can lead to higher levels of obesity and other diet-related diseases, such as diabetes and heart disease.16

A recent study analyzing access to food in Richmond found that about 32,000 people (34 percent of the study area population) in Richmond reside in “critical food access areas,” or “areas considered underserved when compared to the study area as a whole.”17 These areas include North Richmond, the Iron Triangle neighborhood, and South Richmond. On average, Richmond residents must travel almost a mile to reach a full service grocer, though some residents must travel even further to access food. Given that approximately 10 percent of households in Richmond do not have a vehicle, these distances to food retailers have a significant impact on accessibility to whole and healthy foods.18 According to the same study, these food challenges, and resulting health complications, disproportionately impact Richmond’s low-income residents and communities of color.19 A recent study found that “for every supermarket or farmer’s market located in Richmond, there are at least six fast food restaurants and convenience stores.”20 Furthermore, Richmond faces a poverty rate double that of Contra Costa County.

In addition, Richmond still faces extreme underenrollment in California’s Supplemental Nutrition Assistance Program (SNAP), CalFresh. According to the Contra Costa County Employment and Human Services, approximately 40 percent of Contra Costa County residents who are eligible for federal food assistance programs are not enrolled. No data was available for underenrollment percentages in the city of Richmond, but it is possible that this percentage is higher than 40 percent for Richmond residents. This is despite the fact that enrollment in Contra Costa County’s CalFresh program has increased 410% from 2006 to 2014. Currently, there are about 6,000 Richmond households (approximately 15,000 individuals) enrolled in CalFresh, out of a total population of 107,571.21 There are many factors that can contribute to these gaps in enrollment, including: language barriers, fear that enrollment will impact immigration status, stigmas tied to federal assistance programs, misinformation about eligibility and benefits, administrative churning, and individuals thinking the benefits are too low to go through the hassle of enrollment. Finally, there is also the added barrier that the most recent 2014 Farm Bill has prohibited the use of federal funds toward advertising for SNAP or CalFresh programs.22 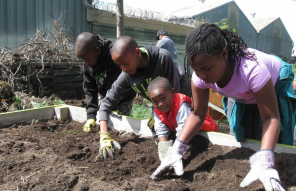 Richmond’s local government has implemented substantial planning and policy measures to address many of its food and health challenges, guided by a Community Health and Wellness Element in its General Plan that “targets the social, economic, physical, and environmental causes of health inequities and poor health outcomes.”23 In addition, the City of Richmond is one of the first cities to incorporate an Energy and Climate Action element into its General Plan. The Climate Action Element is a roadmap for how the city can reduce greenhouse emissions and prepare for the impact of climate change on public health, infrastructure, and ecosystems. 24 This element also incorporates urban agriculture into its assessment, stating that urban agriculture “has the potential to supplement the availability of fresh fruit and vegetables in the community, provide economic opportunities to Richmond residents, lower food costs, reduce overall energy consumption and build social cohesion.”25

The City of Richmond has also started working with the Department of City and Regional Planning at UC Berkeley to identify key climate action areas to include in the General Plan. A collaboration between the BGC, City of Richmond, and community partners could be developed to advance policy changes and innovative projects geared toward food system transformation and climate adaptability. These partnerships would provide the technical expertise needed for the next generations to develop and implement sustainable solutions that would minimize the current food system impacts and alleviate future environmental and soil degradation.

The new campus could also partner with the City of Richmond and local organizations to plan for the inevitable changes in the climate that will likely impact the Bay Area and beyond. The BGC could set itself ahead of the curve by designing and planning urban infrastructure that centers the needs and priorities of marginalized communities, especially since the burden of these climatic changes falls most heavily on these populations.26 Moreover, these partnerships and the outcomes from the collaborative work could hopefully be applied elsewhere around the globe, vis-à-vis the partnerships that the BGC hopes to establish with other universities from around the world.

The BGC, as it’s located in Richmond, is a key site where this work can happen in a more deeply engaged fashion. Several UCB faculty have already conducted related community-based research projects in Richmond, including Rachel Morello-Frosch, Malo Huston, Jason Corburn, Khalid Kadir, Meredith Minkler, and john a. powell. The BGC can take advantage of the innovative work already happening in Richmond to fulfill its own mission while at the same time supporting the surrounding community. Richmond is particularly well-situated to succeed in this type of collaboration as a vibrant food movement already exists in the city. The Richmond Food Policy Council, the Richmond City government, and organizations like Urban Tilth, Ma’at Youth Academy, the Contra Costa Food Bank, Playndirt, EcoVillage Farm, and others have made positive steps toward transforming the local food system, both independently and in collaboration with one another. 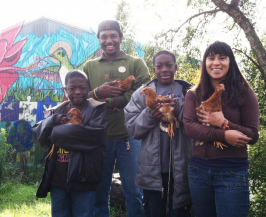 The Richmond Food Policy Council was formed in December 2011 to “create a local, equitable, and sustainable food system based on regional agriculture that fosters the local economy and provides healthy affordable food for all people living in Richmond.”27 Their policy development and advocacy have shaped local policy in coordination with the local city government and school district. Most recently, the City of Richmond has been actively working with the Richmond Food Policy Council on an Urban Agriculture Ordinance that aims to support local agricultural initiatives by simplifying the process for submitting paperwork to the city, lowering permitting fees, eliminating certain zoning requirements, and promoting community gardens as a space for social and educational activities.28 The West Contra Costa Unified School District recently established two salad bars at Richmond elementary schools after the Food Policy Council highlighted the need for more fresh and healthy food in local schools.

Urban Tilth is the sponsoring organization of the Richmond Food Policy Council and anchors much of the food equity and urban agriculture work in Richmond. Established in 2005, Urban Tilth describes its mission as working to “help our community grow our own food; train and employ our own young people as ‘home grown experts;’ teach our local residents about the relationships among food, health, poverty, and justice; foster public foraging programs; and forge partnerships with local small farmers to increase demand for their produce.”29 They have 13 school and community gardens and urban farms that it uses as sites for their above-mentioned work. Their work has been a catalyst for progressive policy initiatives within Richmond.

A focal point of food equity and community health work in Richmond is Unity Park, a newly formed park on the Richmond Greenway – a 1.5 mile-long area that was previously railroad property. The Richmond Greenway is a project that came about as a result of a grassroots mobilization in 2006 that eventually led to its adoption as a public park in 2011 by the City of Richmond. This initiative reclaimed the abandoned railroad running through South Richmond as a green space for community residents that has been restored and maintained by hundreds of neighborhood volunteers.30 The Contra Costa County Food Bank has also been doing tremendous work in Richmond over the last 40 years. The Food Bank has a mobile food pantry with seven sites in Richmond and North Richmond, as well as a number of other programs targeting seniors, children, and youth. The Food Bank serves one in eight people in Contra Costa and Solano Counties and distributed 20 million pounds of food last year.31 In addition to these above-mentioned efforts, there are many other organizations in Richmond that are actively working toward sustainability and transformation in the food system and green spaces in Richmond, which are included in Appendix A.

Given this rich local landscape, there is a great opportunity for further collaboration to positively transform Richmond’s food system through partnership with local organizations, residents, and city government, and to anchor Berkeley’s shared goals in Richmond’s community for the mutual benefit of all stakeholders. These efforts could ultimately serve as a model for application on a regional, national, and even global scale.

Richmond is particularly well-situated to succeed in this type of collaboration, as a vibrant food movement already exists in the city.