Foundations of a Housing Crisis 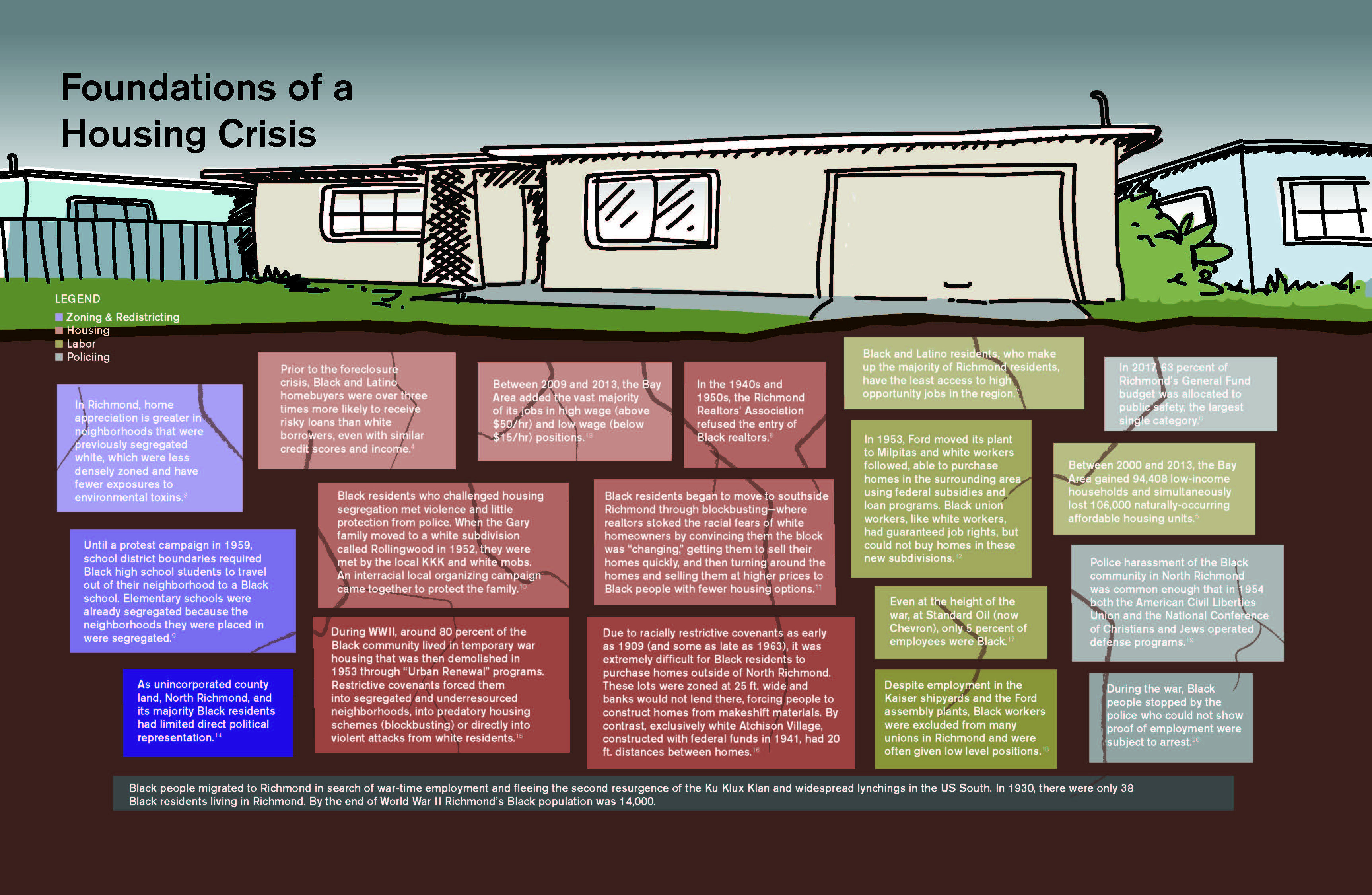 In Richmond, home appreciation is greater in neighborhoods that were previously segregated white, which were less densely zoned and have fewer exposures to environmental toxins.3

Prior to the foreclosure crisis, Black and Latino homebuyers were over three times more likely to receive risky loans than white borrowers, even with similar credit scores and income.4

In the 1940s and 1950s, the Richmond Realtors’ Association refused the entry of Black realtors.6

Black and Latino residents, who make up the majority of Richmond residents, have the least access to high opportunity jobs in the region.7

In 2017, 63 percent of Richmond’s General Fund budget was allocated to public safety, the largest single category.8

Until a protest campaign in 1959, school district boundaries required Black high school students to travel out of their neighborhood to a Black school. Elementary schools were already segregated because the neighborhoods they were placed in were segregated.9

Black residents who challenged housing segregation met violence and little protection from police. When the Gary family moved to a white subdivision called Rollingwood in 1952, they were met by the local KKK and white mobs. An interracial local organizing campaign came together to protect the family.10

Black residents began to move to southside Richmond through blockbusting—where realtors stoked the racial fears of white homeowners by convincing them the block was “changing,” getting them to sell their homes quickly, and then turning around the homes and selling them at higher prices to Black people with fewer housing options.11

In 1953, Ford moved its plant to Milpitas and white workers followed, able to purchase homes in the surrounding area using federal subsidies and loan programs. Black union workers, like white workers, had guaranteed job rights, but could not buy homes in these new subdivisions.12

During WWII, around 80 percent of the Black community lived in temporary war housing that was then demolished in 1953 through “Urban Renewal” programs. Restrictive covenants forced them into segregated and underresourced neighborhoods, into predatory housing schemes (blockbusting) or directly into violent attacks from white residents.15

Due to racially restrictive covenants as early as 1909 (and some as late as 1963), it was extremely difficult for Black residents to purchase homes outside of North Richmond. These lots were zoned at 25 ft. wide and banks would not lend there, forcing people to construct homes from makeshift materials. By contrast, exclusively white Atchison Village, constructed with federal funds in 1941, had 20 ft. distances between homes.16

Even at the height of the war, at Standard Oil (now Chevron), only 5 percent of employees were Black.17

Despite employment in the Kaiser shipyards and the Ford assembly plants, Black workers were excluded from many unions in Richmond and were often given low level positions.18

Police harassment of the Black community in North Richmond was common enough that in 1954 both the American Civil Liberties Union and the National Conference of Christians and Jews operated defense programs.19

During the war, Black people stopped by the police who could not show proof of employment were subject to arrest.20