Stages of Gentrification in Richmond Neighborhoods

Stages of Gentrification in Richmond Neighborhoods

To compose a singular assessment of gentrification in Richmond neighborhoods, this analysis combines the previous datasets into an overall measurement for each Block Group. The first component of this measurement is the analysis of whether there is vulnerable population. A Block Group has vulnerable population if three out of the following four rates are higher than the city average: renter-occupied households, people of color, residents with less than bachelor degree education, and households earning less than 80% median family income. 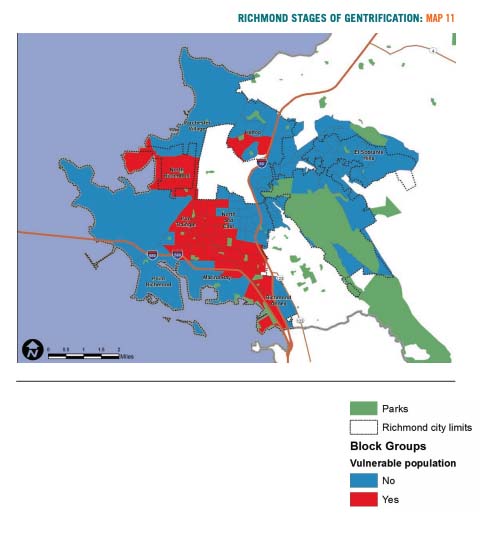 All Block Groups within North Richmond and Iron Triangle neighborhoods have populations which can be considered vulnerable. Additionally, portions of Hilltop, North and East, and Richmond Annex display presence of vulnerable population. 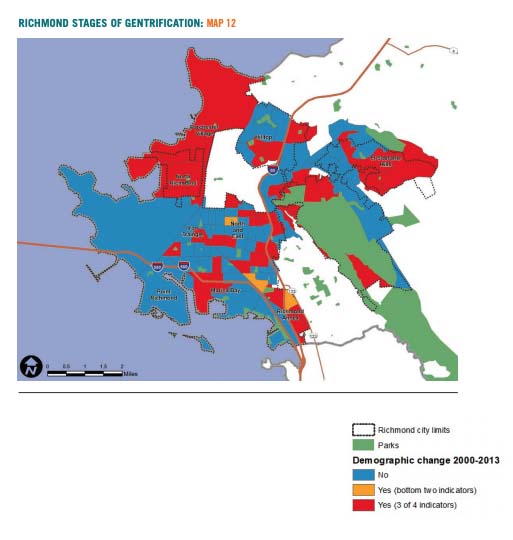 The second component of the assessment measures whether there has been gentrification-related demographic change. For an area to qualify as having gentrification-related demographic change, at least three of the following four conditions must be intensifying faster than the city average: the rate of homeowner-occupied households, median household income, percentage white population, and percentage of adults with a bachelor degree or above.

Richmond neighborhoods vary, with some areas showing gentrification-related demographic change while others do not. All of Parchester Village and North Richmond, and portions of El Sobrante Hills and Richmond Annex display gentrification-relation demographic change (See Map 2 red areas). Some areas of the North and East, Iron Triangle, and Marina Bay neighborhoods also show this change.

Some areas show an increased percentage of White residents and residents with higher than a bachelors degree, without an increase in homeownership or household income. There are three Block Groups that exhibit this trend (displayed in orange). 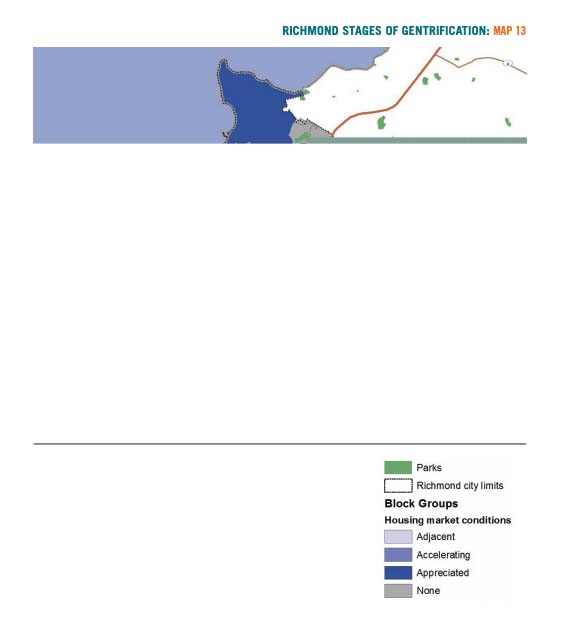 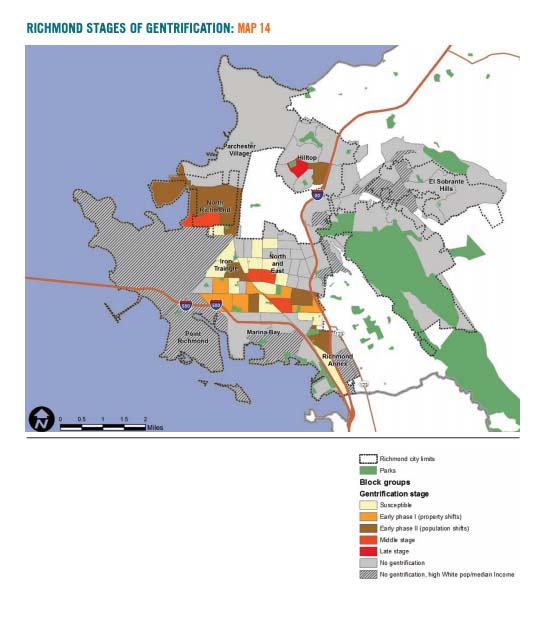 Combining the data on vulnerable populations, demographic change, and housing market conditions to assess an overall trend reveals the stage of gentrification that each neighborhood is in. Richmond Block Groups are categorized into six neighborhood types: Susceptible, Early Phase 1 or 2, Middle Stage, Late Stage, and Ongoing Gentrification.

Neighborhoods categorized as None show no signs of gentrification. These areas are broken into two groups: one which already has a high percentage White population (>50% and high median income (>$75,000) in year 2000, and another that does not. This latter type applies to areas like Parchester Village, where there is 80% non-white population and there has been significant demographic change and appreciated housing values, but there is not a vulnerable population due to the fact that the area has only 20-40% renter-occupied homes and 50% low income households. The other category for areas that already had higher percentages white and higher median income applies to areas like Point Richmond. There are no areas in the city that fell into the category of Ongoing Gentrification.

This is significant because the last stage of gentrification involves displacement of vulnerable populations. This means that Richmond policymakers and community members have an opportunity to prevent neighborhoods from moving into that stage by implementing anti-displacement protections now. Swift action is necessary in order to prevent significant displacement of Richmond’s existing population.