WHILE POLICYMAKERS must adopt changes to allow the inclusion of transgender and gender non-conforming populations within existing bathroom infrastructure, future design strategies can also address unequal access challenges. Data collection, as outlined above, can allow institutions to understand the holistic bathroom uses individuals may require, and guide a more pluralistic approach to accomodations. The industrial two-gender bathroom design is, in many instances, inadequate in meeting the needs of gender non-conforming populations as well as those whose disabilities, family and privacy needs who require other accommodations. While these needs are very different in scope, they share a common interest in the development of new infrastructural approaches to bathroom provision. Institutions should work towards allowing choice in bathroom by increasing the range of types of facilities as needed. This section outlines pragmatic and well as inclusive ideals for overcoming access challenges.

Attempts to move beyond the standard public restroom binary requires addressing both the substantial investment required to undertake infrastructural changes (and the institutional inertia that attends it), as well as cultural resistance.21 Efforts to enable transgender access to restrooms are consistently responded to with appeals to sexist troupes of the risks to female safety. Even on progressive college campuses, activist efforts have faced opposition from conservative anti-LGBTQ groups, with explicitly transphobic messaging. But they also face opposition, sometimes in the form of indifference from mainstream gay and lesbian groups and more frequently from institutional bureaucracies resistant to modify the standardization of sex segregation.22 Building on the greater visibility of transgender issues, recent activism has been more successful. In 2016, for instance, California passed a bill into law mandating all single-user restrooms be designated gender neutral. In the same year, Massachusetts mandated allowing the use of bathrooms according to gender identity. 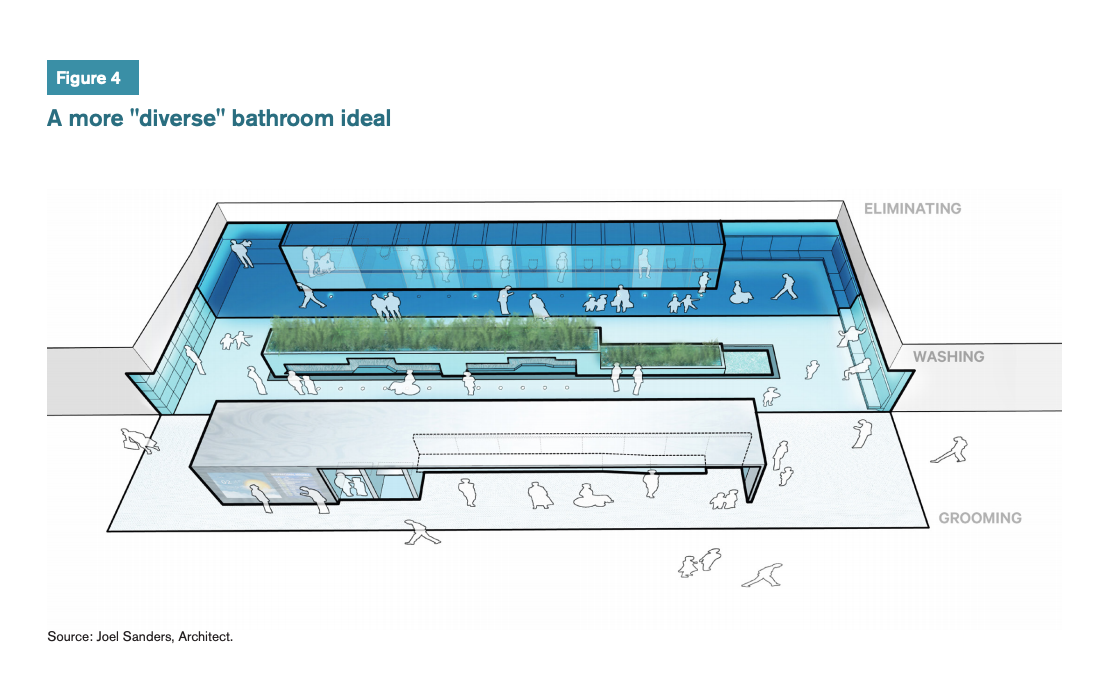 Moreover, this approach represents a more practical standard for future facilities that recognizes the problems with replacing one flawed universalism (binary restrooms) with another (total gender neutrality). Transgender scholar Susan Stryker and architect Joel Sanders recently called for abolishing sex-segregated bathrooms altogether as a means to recognizing human diversity in bathroom needs. They argue for European-style enclosed stalls (with floor-to-ceiling doors) and a communal washroom in a single facility, citing it as a trend among Manhattan restaurant and bars. Their solution is ambitious and follows an argument for “a new way of thinking that shifts the argument from gender neutrality to gender diversity and, ultimately, to human diversity.”23

While their solution has several merits and is an ideal to strive for in many contexts, advocating for its universal adoption poses several challenges. First, attempts by activists to break the sex-segregated mold, especially at institutions, has met opposition on many fronts. Additionally, many cisgender and transgender women alike view women-only facilities as necessary for validating their identity and needs.

Replacing the universal sex-segregation model with a different universal for gender neutrality is in some instances impractical and would leave many cis and transgender individuals unsatisfied. Sonia Katyal argues that this solution reflects the pitfalls that come with essentializing identity experiences: “There are dangers in presuming that all people who identify as transgender seek the same thing, a presumption that is categorically flawed.”24 In the same way that rigidities in the binary pose a challenge to those looking to undo highly gendered legal structures, the built environment and bathrooms in particular demand a rethinking of how to create structures that respond to the different needs of women, both cis and transgender, while structuring remedies accordingly. Russell K. Robinson and David M. Frost note that both groups may signal a preference for women-only restrooms—as in the Lusardi case, this inclusion can be a necessary affirmation of inclusion. Meanwhile they argue that “cis women are likely to experience required multi-user gender-neutral bathrooms as an attack on their sense of self—and one imposed in order to favor a small minority.”25 Robinson and Frost argue that the goal “should be to permit people freedom to define their gender and sexual orientation according to their own conscience and not denigrate one’s standing in society because one’s gender identity and/or sexual orientation.”26 To enable inclusion, and recognize the fluid lines of gender identity, policymakers should aim for practical implementation of pluralistic solutions.

Against the universal solution, policymakers should work to enable bathroom users a variety of options. Activist efforts around bathroom access have been rich for recognizing the intersectional needs of bathroom users, and in line with the legacies of anti-discrimination movements, emphasize the rights of individuals with disabilities and women needing lactation facilities. Policymakers can accordingly take immediate steps to include all-gender facilities among their plans that already work to accommodate diverse needs, such as for family restrooms and disability accommodations.

The lessons of single-user restrooms and handicappedaccessible single stalls need to be applied to the design of large-scale, multi-user facilities that allow individual autonomy in stalls with mixing of persons by gender, age, and physical ability in the washing common areas. Separate, more private facilities, respect preferences for access to women-only facilities (for cis and trans women). Under this model, segregating uses is based on legitimate needs and demands rather than a discriminatory and historically outmoded binary.