AT&T’s total California wireline broadband footprint encompasses 9,683,239 households, or 70.8 percent of total California households.3 The analysis in this report focuses on this footprint—the households located in areas where AT&T California is the Incumbent Local Exchange Carrier (ILEC). The data was compiled from two sources. The AT&T California broadband figures were compiled using the FCC Form 477 data. We used the most recent dataset, which presents data as of June 2016. The FCC Form 477 data is self-reported by each company and contains the maximum speed that companies advertise by census block.4 The income data was derived from the American Community Survey (ACS) five-year estimates, which provides demographic data at the block group level.5 The methodology is explained in more detail in the Appendix.

The FCC requires companies to report data separately for wireline, fixed wireless, and mobile broadband, as well as for residential consumer and business broadband availability. This study analyzes only wireline broadband advertised by AT&T to residential customers; all other broadband data is excluded. This methodology is consistent with the FCC 2016 Broadband Progress Report and the CPUC 2016 Competition Report, both of which explain that wireless is not a substitute for a home wireline connection because wireless is less reliable, more expensive, and it is difficult to do important activities such as homework or apply for a job on a smartphone or small mobile device.6

In AT&T service areas there are 252,075 households with no broadband available.

This analysis of the June 2016 FCC Form 477 data provides a first look at the income characteristics of the California communities that AT&T has chosen as pioneers in its fiber-to-the-home deployment. The June 2016 data reports AT&T fiber-to-the-home deployment in 2,886 census blocks reaching 68,029 households. Because there is no regulatory oversight of AT&T’s fiber-to-the-home deployment, AT&T is free to choose the communities in which it builds its all-fiber GigaPower network. Our analysis finds that AT&T has built its all-fiber network disproportionately in higher income communities. If this pattern continues, it has troubling consequences for low- and moderate-income Californians, leaving many without access to AT&T’s gold standard all-fiber network and exacerbating the digital divide.

Table 1 and Charts 1 through 8 detail the median household income for the most advanced technology available to households across California and in seven counties where AT&T has deployed fiber-to-the-home. A clear pattern emerges: those with access to AT&T’s fiber-to-the-home network have the highest median household income and those with only DSL availability have the lowest median income. 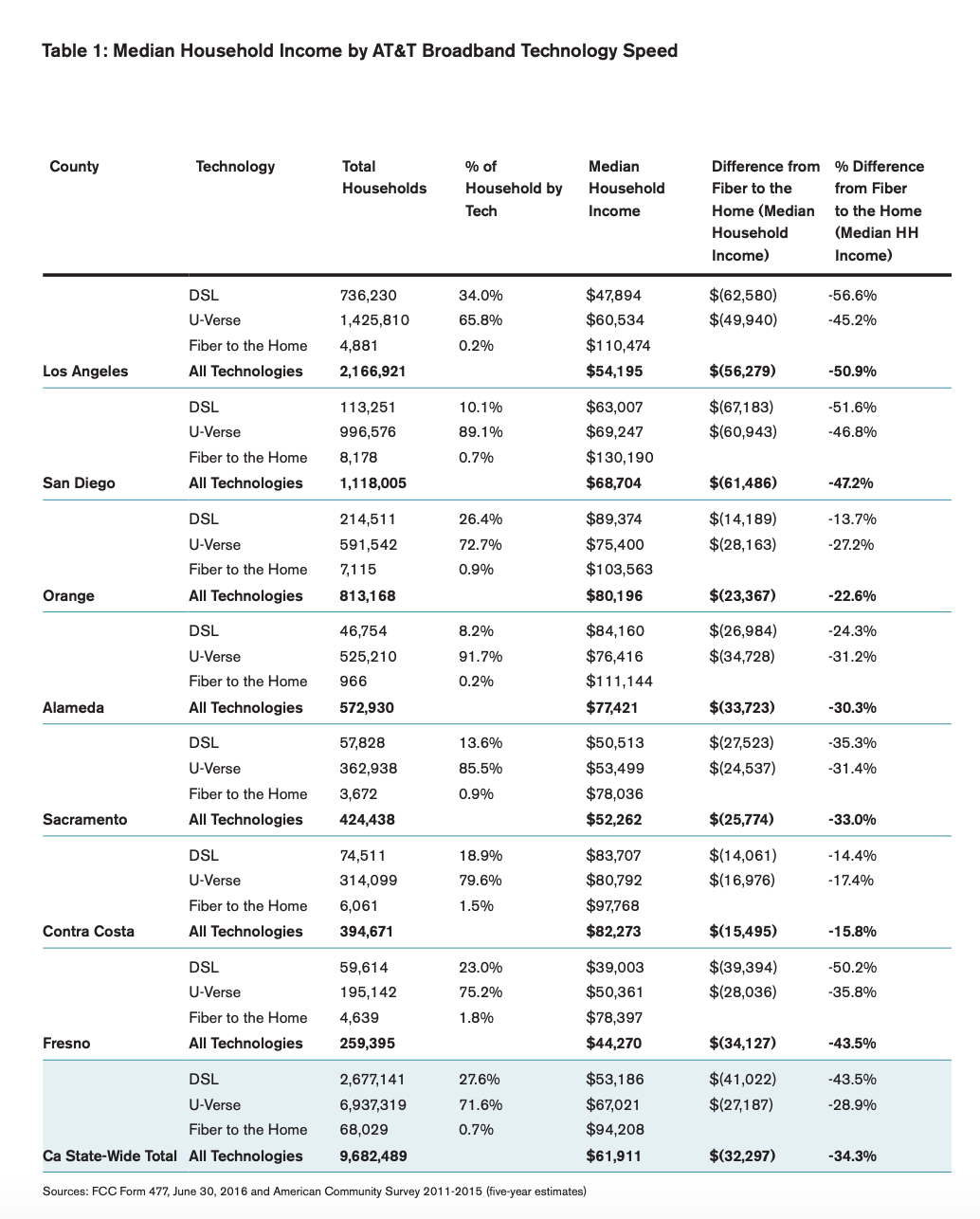 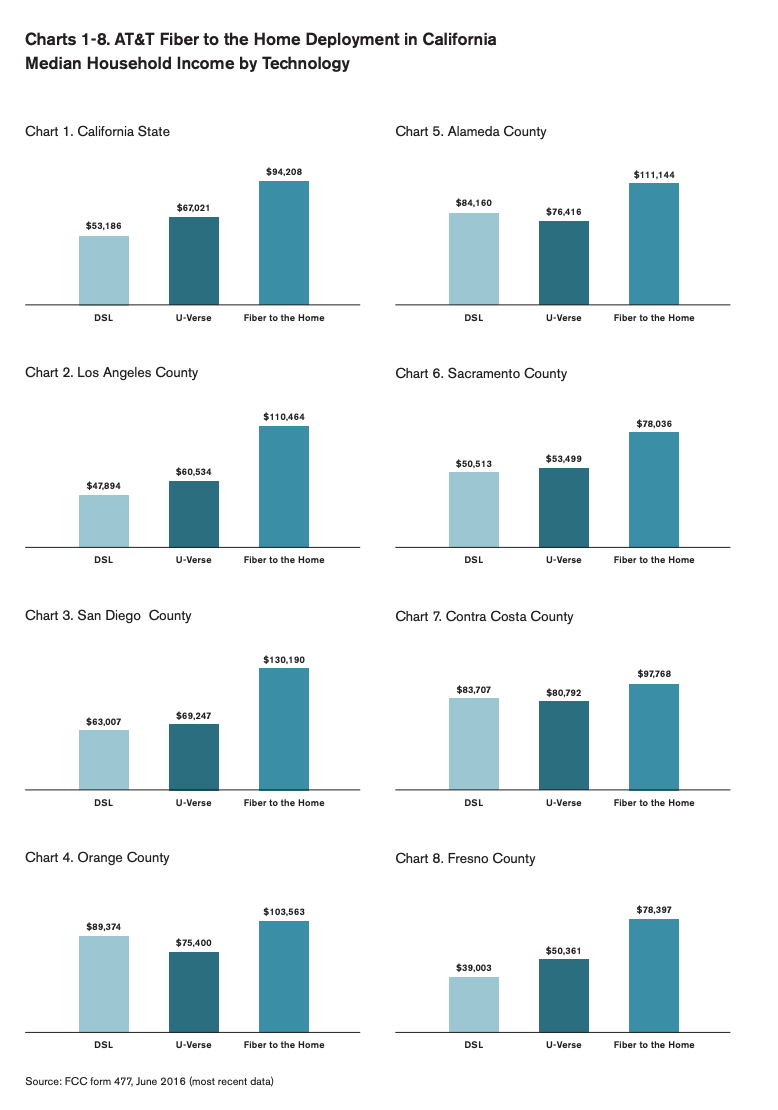 AT&T Leaves Many California Communities Stuck in the Slow Lane

AT&T’s advertised broadband speeds leave many Californians underserved, below the official CPUC standard pf 6/1 Mbps, and without high-speed broadband meeting the federal standard of 25/3 Mbps. The following figures drawn from our analysis present a stark picture of the inadequacy of AT&T’s wired broadband network in California. A complete list of AT&T broadband speeds by county is available in Table 5 in the Appendix.

AT&T’s lack of high-speed Internet is not limited to rural areas: the company also falls short in populous urban and suburban counties throughout California. Table 3 shows the number of households without access to AT&T broadband at CPUC and FCC standard speeds for the 10 counties where AT&T has the largest footprint. 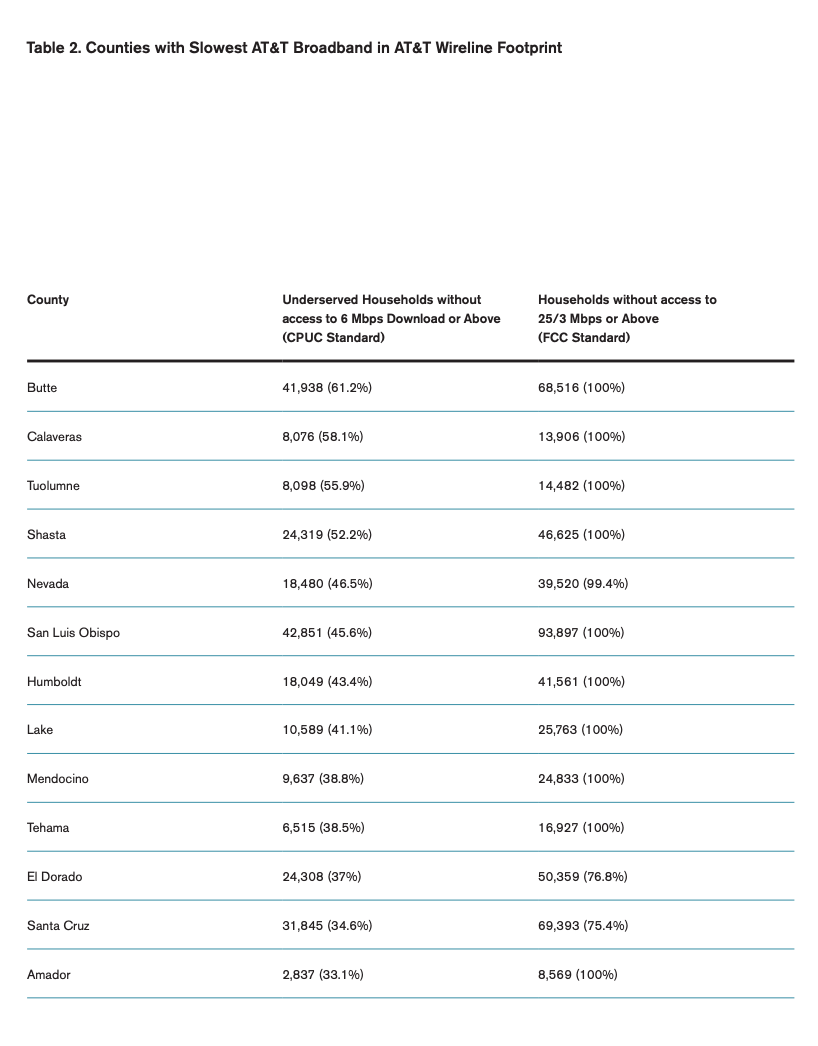 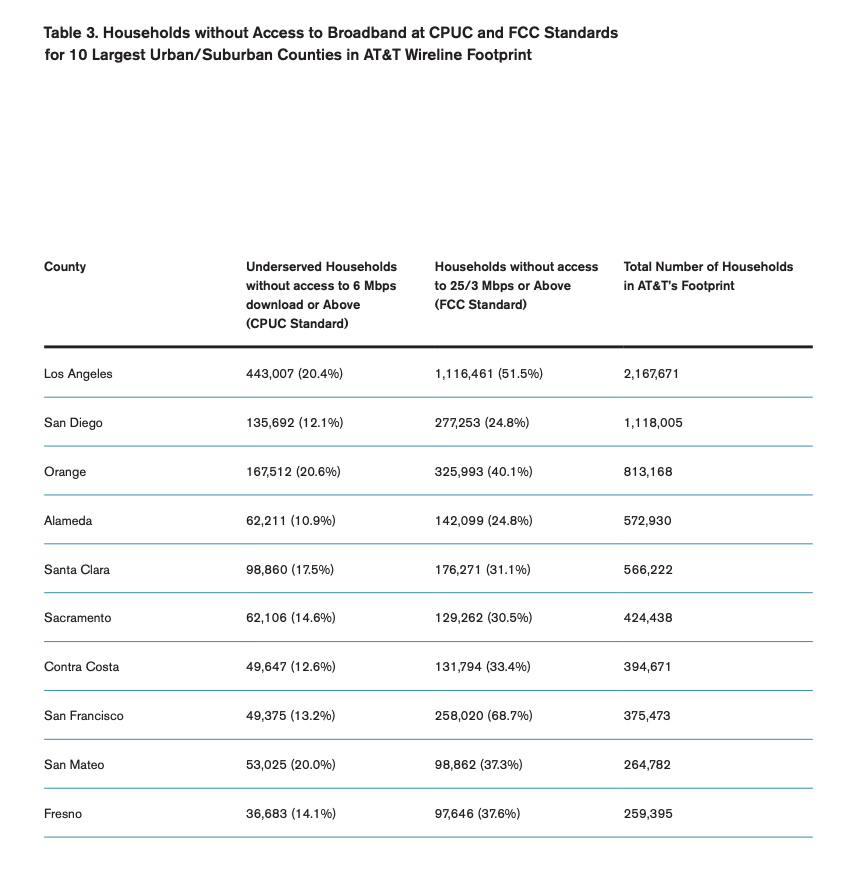 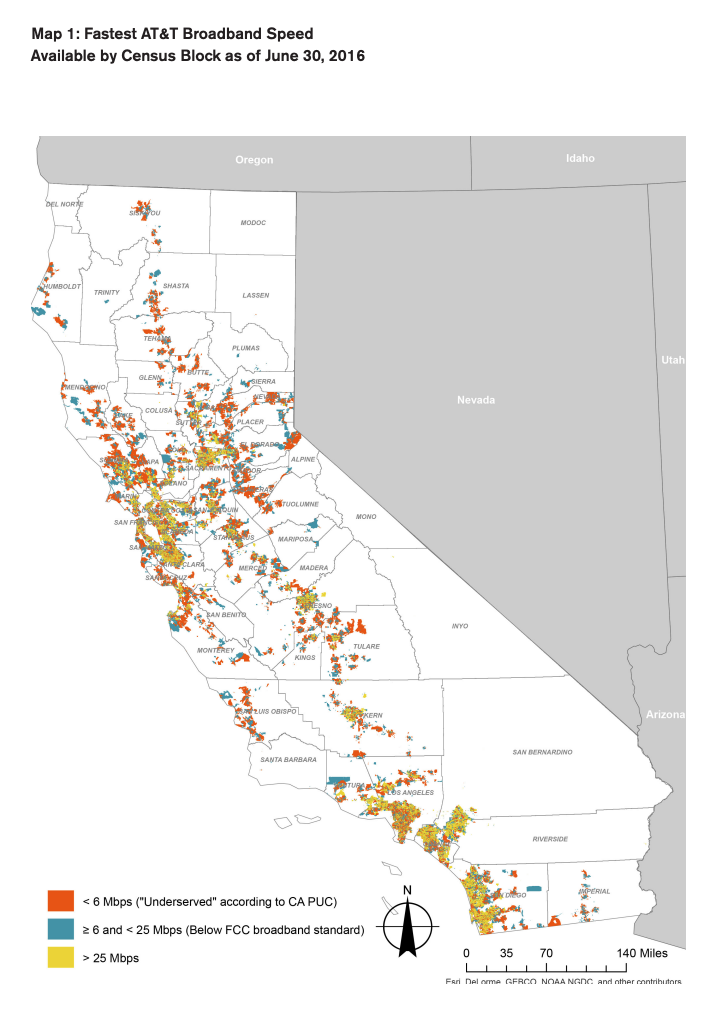 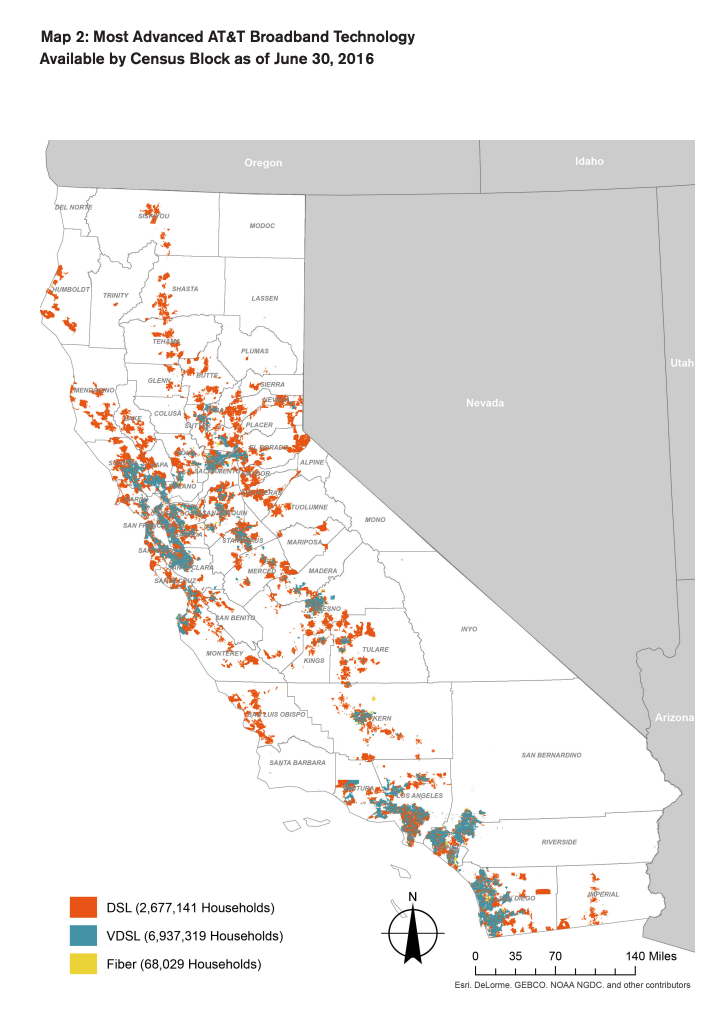