Home with a Purpose: A History of the Safe Return Project

ONE THURSDAY MORNING in 2012, a nondescript county hearing room in Martinez, California was unexpectedly filled with over 100 residents holding signs that read Invest in People, Not Prisons. This group of formerly incarcerated people, faith leaders, and other community members were responding to the county sheriff ’s plan to expand the county jail. Jeff Rutland, who had been incarcerated for seven years, offered testimony on what it was like to come home with nothing more than a paper bag and $120, and the many barriers and stigmas he faced.

Rutland was part of the Safe Return Project team, a group of eight formerly incarcerated residents that had spearheaded months of organizing, research, and advocacy leading up to the contentious hearing. As a result of their efforts, the sheriff announced he would withdraw the proposed jail expansion, marking a historic shift. County officials decided to dedicate the $5.2 million toward transitional employment, bail reform, housing, and community services. How did this group of formerly incarcerated people develop the power and capacity to lead an effort that made Contra Costa County the only county in California to reject a proposed jail expansion? This report answers that and other questions by analyzing the formation, development and impact of the Safe Return Project. 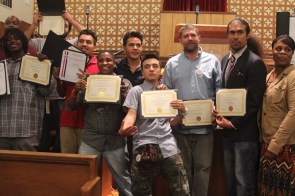 [Currently] there is a willingness to question gross investments in criminal justice and I think that as part of continuing to push that questioning. we need formerly incarcerated individuals involved… because at the end of the day, as long as they are not seen and not heard, it is easier to deny their humanity.

Recent shifts at the national, state and local level indicate that the American appetite for punitive and expensive criminal justice policies may have some limits.1 As the human and fiscal costs of mass incarceration and the myriad detrimental impacts of these policies are more widely understood, the country is re-evaluating criminal justice priorities. While policies that restructure federal drug sentencing, eliminate lifetime sentences for minors and move inmates out of state facilities are important, they do little to address the lives of millions of Americans who have already experienced incarceration. Ninety-five percent of the incarcerated are released,2 with most of them returning to the communities in which they lived prior to incarceration. Many of them will confront severe challenges to finding stable housing and work while coping with the residual trauma and stigma associated with incarceration. In too many communities, the services available to help individuals acclimate to coming home are few and far between. Where services do exist, the people providing them often have no personal experience with incarceration. 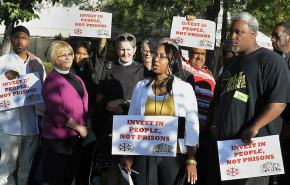 Given that 68 million Americans have a criminal record and that 76.7 percent of people who serve a prison sentence are arrested within five years of release, there is a desperate need to develop new strategies and tools to help those who have been incarcerated.3 In many ways, it is the people who have been directly impacted by incarceration who most understand what is needed. Yet they are very often excluded from participating in, let alone leading efforts around reentry. This report examines a small organization founded in Richmond, California five years ago that is based on the idea that those directly impacted by incarceration are best suited to addressing the concerns of those coming home from jail or prison.

The Safe Return Project is comprised of Richmond residents who are working to study and address the needs of the formerly incarcerated. The goal of Safe Return is to identify strategies that respond to community needs, while developing the capacity for the formerly incarcerated to take the lead on the issues that impact them. Since the program started, it has hired formerly incarcerated people to engage in participatory action research (PAR), community organizing, and policy advocacy on issues impacting individuals coming home from jail and prison. The work of the Safe Return team has not only transformed the lives of many individuals, but it has also impacted the broader community in Richmond, as well as the national narrative around incarceration and reentry.

Reentry refers to the transition back into the community for those who have been incarcerated and are released from confinement. Reentry programs are generally understood to involve direct services provided to people coming out of prison and jail. Most reentry programs attempt to address specific barriers individuals face, such as gaining access to housing, services or job training, etc. The founders of and participants in the Safe Return Project reject the notion that Safe Return is a reentry program. However, what they are articulating is that Safe Return was not designed to provide direct services for the formerly incarcerated. It is a program engaged in community advocacy that is driven by the needs of its members and constituents. In this way it could be argued that Safe Return is a reentry program, with a broader notion of what reentry requires.

This report tracks the genesis and evolution of the Safe Return Project, beginning with the history and context that led to the formation of such an unusual organization. The rest of the report examines some of the processes and practices utilized by the Safe Return team to understand its success as well as the challenges the program faced. The goal of this report is to help others think differently about how communities can support leadership by formerly incarcerated people and facilitate more effective reintegration policies.

This report is based on data that was gathered using a multi-method approach. A review of organizational documents, media coverage, and training materials was undertaken to help provide history and context. Twenty formal interviews were conducted with program participants, community members, and agency actors whose work was thought to have impacted, or been impacted by, the Safe Return Project. Of the 20 formal interviews conducted, 10 were with current and former participants in the project and 10 with agency personnel or community partners. Finally, participant observations at Safe Return meetings, hearings at which members testified, community forums, and other events were also used as part of the evaluative process.

Because of the small scale of the project and the difficulty in quantifying many of its key benefits and challenges, qualitative methods such as interviews proved essential to understanding and explaining this multifaceted project and its processes and outcomes. Much of this report, therefore, is organized around the themes that emerged from our interviews (See Appendix A for copy of interview instrument). Fictitious names or other identifiers are used when direct quotes or stories are used, except in the case of public officials or team members who wished to be identified by their real names.